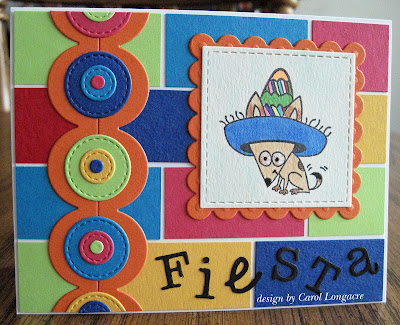 I found this funny stamped image in my box of doo-dads recently, so after hoarding it for several years, I decided it was time to make a card with it. I made the background with some 1"x2" snippets and placed them in a bricked pattern. The orange scalloped border was done with 2 SNSS large scalloped border dies placed side by side. The circles were done with Gina Marie stitched circle dies and the sentiment was done with die-cut alphas that were also found in my box of NBUS (never before used schtuff). The chihuahua was colored with Copics; die cut with a Gina Marie square stitched die and placed on an orange mat done with a Spellbinders scalloped square die. I hand-drew some red lines in the whites of his eyes because this little pooch has been partying! The final touch was adding some liquid applique to those tired little eyes!

I'm taking this over to the Snippets Playground #230 where the only requirement is to use your leftover snippets.

Wishing you a beautiful day - and thanks too for stopping by!

Totally brilliant card Carol! I love the little pooch and, as you said in your comment, it's a super way to use up snippets by building a background. I like yours loads more than mine I must say!

Lovely, bright card. I love the little chihuahua, his bloodshot eyes made me smile. xx

I love this Carol. Great colours and a good idea for using up snippets. I love that little dog image. Had to smile at his bloodshot eyes! Barbxx

Faith A at Daffodil Cards said...

WOW love the colours and the eyes, such a fun card.
Faith
x

Wow this is so colourful. Love the carnival feel to this card. Hugs Mrs A.

This made me smile huge! What a cute & fun image, and I love the way you've used these bright snippets. Also like the bold scallops trim as well. Fiesta is a perfect sentiment on this card, and it's just really darling & delightful. What a designer you are, to use up some snippets to make this cutie!!! TFS

Hey, his eyes look like mine but mine are from allergies! This card is amazing and I sure wish I knew more about the fun image. Bright, festive and awesome!

Fun, fun, fun!! This is really a Fiesta! :D So colourful, bright and happy card and you have made your own background with snippets!! Wow! All the pieces are perfectly lined up!! You are so accurate!!I'm not able to do this! Fab card!

His eyes do look like he has been partying, but in his case I think that was a good choice. I love all the primary colors and your stitched dies. Fun, colorful card that will brighten anyone's day. Enjoy your week.

What a fun card! Cute idea to draw the lines in his eyes too. Love all the circles on the side. Yep, he looks like he partied a little too much.
Lynn

I love the font used on "fiesta" as it seems very festive and perhaps a little wonky, like the wony you get after a few too many sips of tequila. What a fun card overall. Love all those solid colors.

A very fun and cute card, it makes me smile.