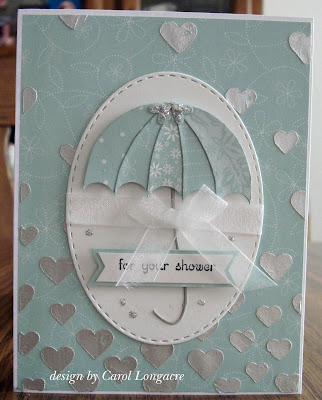 (click all images to make larger for detail)
My husband's nephew is getting married in October and they're having a bridal shower for the bride-to be, so I made a card for them using SU! Soft Sky dsp that I've been hoarding forever. I had no umbrella image, so I created one from different snippets of the dsp. I drew an umbrella, and cut it into pieces to use as a template and fussy cut them, using a circle punch to round the ends. After it was all together, I added 2 tiny punched hearts to the top, adding silver stickles. I placed it on a GMD stitched circle and used the stem from a floral die cut for the umbrella handle and placed a SU! sentiment over the top, adding a few Stickle silver drops and some sheer ribbon. The background was done with Nuvo Pure Platinum embellishment mousse and a SU! hearts stencil on another piece of Soft Sky dsp.
Since her online gift registry was nearly depleted, I decided to just give the bride-to-be some cash, so I made a money gift envelope...

This is a quick and easy envelope to make, and all you do is make a belly band to hold it together. Using more Soft Sky snippets, I die-cut the SU! Hearts A Flutter framelit die, adding Kaisercraft pearls in a matching color. I also die cut the white heart and added a punched heart that was covered with more Nuvo mousse to match the card. The band was a strip of Soft Sky card stock, punched on both sides with a Martha Stewart doily punch, with a strip of more dsp glued to the center.

I finished the card and money gift envelope, but they also asked for a favorite recipe to be filled out on a card that was included with the invitation, and to also include a jar of any spice, so a gift bag was needed to hold everything... 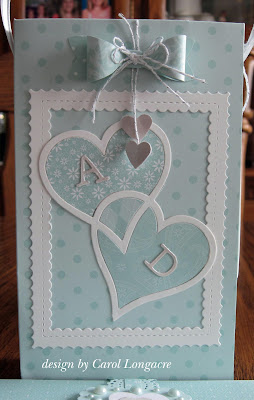 Here is the gift bag with their initials covered in more Nuvo mousse. The dual hearts were done with a Nellie Snellen Filling Die in white and 3 different snippets of Soft Sky dsp. The frame was created with a Gina Marie Designs stitched die. The bow was made with a retired SU! punch, and I used some silver/white SU! twine to attach some punched hearts that were covered with more Nuvo mousse. I love that you can stencil with this mousse or just dab some on your finger and rub it anywhere for a thinner layer - which is what I did with the hearts and initials before cutting them with a SU! mini punch and my Quickutz. I attached a white ribbon handle to the top and a tag onto the side of the bag, and this shower gift is ready to go.

I used quite a few snippets of the Soft Sky dsp and cardstock for these items, so I'm entering the collection into the Snippets Playground#332. I still have quite a few more snippets left in the paper pack, but eventually I will find a use for most of them I'm sure :)

Have yourself a wonderful Sunday and thanks so much for stopping by!

Wow, Carol! What a wonderful gift for the bride and groom to be! Your umbrella is so creative! I love all the dimension and the little hearts! The gift bag to hold all the goodies is amazing!

What a lovely gift set! I love the Nuvo mouse stenciling. It looks so pretty against the soft blue background. I also just love the umbrella in the different papers.

Phew, that was a lot to fit in! Everything is lovely in the soft sky color. Nice work, my friend!

WOW, WOW, WOW! You were on a roll with making this lovely set, Carol! Everything looks so nice & pretty and fits the bill perfectly! This is beautiful and I am sure all your hard work will get noticed by the recipients! Love the white & soft sky combination and your umbrella is AMAZING! I would have never known you created it if you would not have said so! Pat yourself on the back, my friend. This is beyond gorgeous and I love everything about this set! TFS and enjoy the rest of the weekend! Hugs~

Wow! How much work, you have been so busy for your husband's nephew! Such fabulous set!! I'm stunned by how you arrange the umbrella with some scraps, scissors and and a punch! You are a genius! :D
Love the belly band for the gift envelope you made, it's so sweet! And the bag looks just gorgeous!!! Fabulous hearts with their initial and that bow with the hanging hearts is a delight!
Have a happy rest of Sunday!

So pretty, and of course your color choices of DP are as always - just perfect. The silver mousse added a lot of subtle sparkle too (not had a lot of success with this stuff. Had several jars that just 'dried up' so you can' spread it with your finger). Enjoyed reading your creative process in adapting the design as you did. The umbrella looks perfect and you are such a clever boots! The little gift envelope and the recipe holder are equally classy & beautiful. They are sure to love this exquisite presentation from you & DH. TFS & Hugs

Beautifully coordinated card and gifts for the wedding - clever umbrella!!

They are all beautiful Carol, I especially love the card - lovely colours and so pretty.
Pauline - Crafting with Cotnob
x

Beautiful card and a beautiful way to give the bride a gift of cash too. I love the wonderful colors and design of both.

Faith A at Daffodil Cards said...

Carol how thoughtful of you to put all this together, I love the colour you used and the umbrella is just awesome, so creative of you. It's ALL BEAUTIFUL. Thye will be thrilled and treasure it all I'm sure.
Faith
x

Holy Moly! Carol, this is sensational plus!!! wow!! So much work and time went into all these and they're just beautiful. I love the Soft Sky and especially the way you did the umbrella! Fantastic!!!
Lynn

The cards are perfect and I love love love the envelope...……...Lis

What a gorgeous gift set...so creative and just beautiful!

What wonderful creations, love how you've made to umbrella, so clever. The colours are so pretty and I'm sure the lucky couple will be thrilled to receive them all. xx

WOW, WOW, and more WOW, Your umbrella is the nicest I have ever seen, even from a die, very cleverly designed and stunning, papers and everything is just so beautiful. Great Job, love this..xx

My! What a lovely and creative set. You really out-did yourself and I love it all!

Wow Carol, this is such a gorgeous gift set you've created here! Absolutely LOVE that umbrella design! I think I have these papers too and still hoarding! LOL!! Love that wonderful silver hearts in the background too! I love how you've made each item different, but still all go together as one beautiful set!! I think they'll love it! :) HUGS

Wow Carol - this is breathtaking! I adore the colour scheme and the shower theme is depicted perfectly. A fabulous gift set!!

This is all so lovely! And I really like that color too.

Wow Carol, you make me want to get married to get beautiful items like these cards and the gift bag and money envelope! I don't need the goodies in it, but love the lovely makes! I love that umbrella you made for the shower, you are so artsy and talented as if I would have tried to make an umbrella, it would haven't been pretty like yours! Love the papers you used and love all the hearts. Your belly band for the money envie is just so elegant and beautiful-I don't know any couple that couldn't use some cash. The bag matches beautifully to your shower card and money envie. It is so beautiful and once again elegant. How fun to add a recipe and a spice-great idea for whomever is throwing the shower and came up with that idea! Well done, I know the bride will adore these homemade items, I know I do! Hugs, Brenda

What a GORGEOUS gift set you have created! And you made that umbrella?!! WOW!! It's amazing! I'm sure it will all be the talk of the shower!