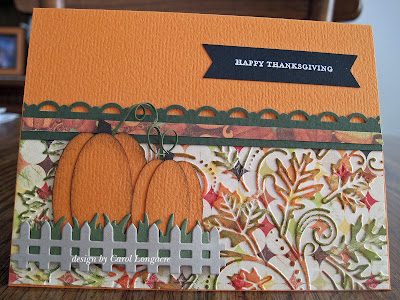 I haven't made pumpkins with my old SU! oval punches in a long time, so I took out some orange cardstock and made some for this card. I used the large oval punch for the large pumpkin, and the smaller oval punch for the other one. I sponged the edges of each oval with chocolate chip ink before assembling them, adding a hand-cut stem and some vines with a couple shreds of green cardstock wound around a knitting needle to curl them. The lower panel is a piece of BoBunny dsp that I embossed with a Darice "fall leaf" embossing folder, then sponged assorted autumn colors on the raised portions. I cut a strip of grass with a SNSS die, then cut a fence with another SNSS die, and placed them in front of the pumpkins. I punched a piece of green cardstock with a SU! scalloped border punch, and added a strip of coordinated BoBunny dsp for a little contrast. The greeting was white heat-embossed on black and is from the SU! teeny tiny wishes stamp set.

I'm sharing this with the Tuesday Throwdown TT#314 challenge - which is "leaves."

I'm also sharing it with the Double D challenge which is "pumpkin time."

Thanks for stopping by and make it a great day whatever you do!

The punched pumpkins are so cute. I really like the embossed and sponged paper. It has a lot of depth. :)

What a gorgeous card this is. I love the way you made the pumpkins with all the stem detail. They look amazing. I've embossed paper before but love your idea of inking over it afterwards. It's a great effect Carol. A very clever card. Barbxx

I just love how we can share challenges! This card is super, and I love the ovals turned into pumpkins. Your embossed leaves look amazing, lady!

Oh my, this card is gorgeous, Carol! I sat here and just looked it over in awe of all the neat things on it! The pumpkins are just amazing, the embossed dsp is gorgeous and I love the grass/fence & pumpkin panel. So pretty and just perfect to go with this beautiful Fall day we are having! TFS and I hope you are enjoying the nice weather! Thanks for the note on the Lawn Fawn snowy hills die. I am going to have to look into those! Hugs~

This is such a wonderful idea and I just LOVE the beautiful Fall scene that you've created with those pumpkins, grass and fence!! I always forget to make pumpkins with the ovals too! :) Thanks for the reminder! HUGS

OH WOW what a fabulous design! Love how you positioned pumpkins behind the grass/fence. Awesome design! Thanks so much for joining in the fun at our Double D ‘PUMPKINS’ challenge! We hope you’ll come back often.

A lovely card Carol, I love the gorgeous autumnal colours especially on the embossed leaves. Clever use of the die cuts to make the pumpkins too.
Jean x

A super card Carol, your pumpkins are fabulous.
Pauline
x

I've always liked these oval pumpkins. This is a nifty punch art card. That embossing folder is something else. And I must say your coloring of it is out of this world. That's a talent I do not possess.

How many fabulous details here!! The pumpkins are very pretty and LOVE your embossed and colourful lower panel, it's a true delight!! Beautiful embellishments with the fence and the grass! The border and the little banner finish the card so well! Always great ideas from you, Carol!! :)

Such awesome detail in your card! Love the idea of using ovals for pumpkins, and yours turned out gorgeous. Like the fence and the grass as well as the coloring on the embossed piece of paper! I'm so glad you joined us this week at Tuesday Throwdown and look forward to seeing more of your work!!

Just amazing and the colours are so spectacular...love your clever creation.xxx {aNNie}

Such a beautiful and cute card. Love the details and colors. Thanks so much for your entry in our challenge at Tuesday Throwdown!

How exciting! Your prize pumpkins won big at the Double D challenge--congrats to you!